Don't get stuck with the rest, TRUCK with the best


Don't get stuck with the rest, TRUCK with the best

The Founder and Owner of Dulcis Logistics!

RodzTMP -
Hello I’m Rodz, VTC founder.. I’m 15 years old and from Scotland
I like to work on and sell computes for fun.
Feel free to dm me at anytime

The Co-Founders and Co-Owner of Dulcis Logistics!

Owen_ -
Heya, I’m Owen and I’m from Scotland.
I like to play TruckersMP!

General Managers are responsible for managing the VTC.

JCBBuilds -
Hey, I'm Jack, I play a lot of ETS2 and ATS and love being apart of Dulcis.

The Human Resources Team are in charge of recruiting drivers, dealing with drivers and answering your questions!

Rdn. -
Hi, my name is Raudne, I'm from Estonia. I love trucks, I have undiagnosed ADHD and am currently suffering from caffein overdose

RollingBarrelz -
Hello , I'm James and I'm from England . I like to play simulation games like ETS2 , ATS , FS22 and more . I love being Dulcis HR Team

The Event Manager is in charge for keeping the Event Team in line.

The Media Manager is in charge for keeping the Media Team in line..

rizziy -
Helo, I'm Richard. From Estonia. Not far away from my 18th birthday. Mostly play ETS2 and Warframe and sometimes I drift on Assetto Corsa 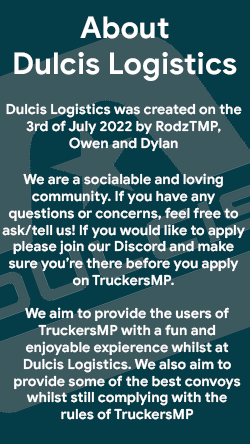