Over the last few months our dedicated single handed Developer Cuthbert has been working on new amazing features for EHHVTC. We have moved to an entirely new panel design for functionality, a better user experience and a simplicity of design, as well as enabling us to add more features in the future.

This has been something we have been wanting to push for a while. It allows groups of drivers to join certain aspects of EHH competing with each other to be the best. From standard "Freight" to our certified "Heavy Haul" division, but those are not our only divisions. Each division has it's own "Division Head" who is responsible for driver engagement and division activity.

We've been working on starting our "Events Panel" area. So far we have developed systems that automatically track whether users have attended certain events and marked their attendance automatically. This used to be one of the responsibilities of the Driver Manager, but with this new tool that is one less responsibility for the Driver Department to focus on. Very soon we will be pushing the next parts of the "Event Panel" which will evolve pushing/ syncing users set routes.

Personal: These will be passive achievements that you can work towards in your own time. From travelling a certain distance on 1 job, or covering a certain total number of miles. New achievements will be constantly set up as we go.

Division: These will be a team effort target achievement. There will be a fixed time frame in which each division will compete to win. Multiple factors can be running in each achievement. (Total cargo hauled, Total Weight, Total Income, Most Economical)

When driving together I'm sure we all like to head in the same direction whilst chatting with friends in Voice Chats. So, we've been working on syncing the economy via the use of "Save Edits". Like TrucksBooks and SpedV drivers can select and sync jobs to the same location when needed. (We are still working to see if we can do the same with the "Cargo Market, however this is much harder due to how SCS has implemented them into the game)

We've always pushed to look into new areas where VTC's haven't and so, with that with the last version of our DriversHub we introduced "Fuel Claims" and "Insurance".

Unfortunately there was a few issues and with time it was fixed, but insurance did not work as intended. Initially insurance worked more like "Boosters" giving you a higher percentage earnt per-job submitted, meaning if you were involved in a collision you would not lose out on income. This has now been changed and Insurance works as intended. It is now based of off "Distance Per Month > Jobs Per Month > Earnings Per Month". A driver enters how many Miles/ Km/s they will cover in a month, how many jobs they think they will complete and the estimated earnings they expect to make. Any jobs then logged within those parameters they will always receive full pay, even if a "pilot car" rams into them and totals their job. The same can be said for late fees or anything similar.

There was not anywhere near as many issues with Fuel claims as there was with Insurance. The only real issue with fuel claims was that each Driver/ User uses a different currency. So, if two drivers were to fill up with 500L of fuel and that cost Driver "A" - £624, but Driver "B" was using Euros, that would cost them €729. When it came to submitting this on the DriversHub, we did not apply a conversion (Noob mistake, we've learnt from it). So, drivers that were using Euro's made more in fuel claims then those using the British Pound. The same has been adapted for each currency supported in ETS2.

We've had our Desktop Application for a while now, but, we have updated it to match our latest panel design improvements. The economy system is used via the "Save Edit" in the navigation bar. (If you would like to see more, I guess you'll have to apply.)

Below you can see a showcase of screenshots of our latest panel. If you would like to see more, feel free to apply. (Statistics are low as we have started from new for a fresh start| Some screenshots are also a week or two old) 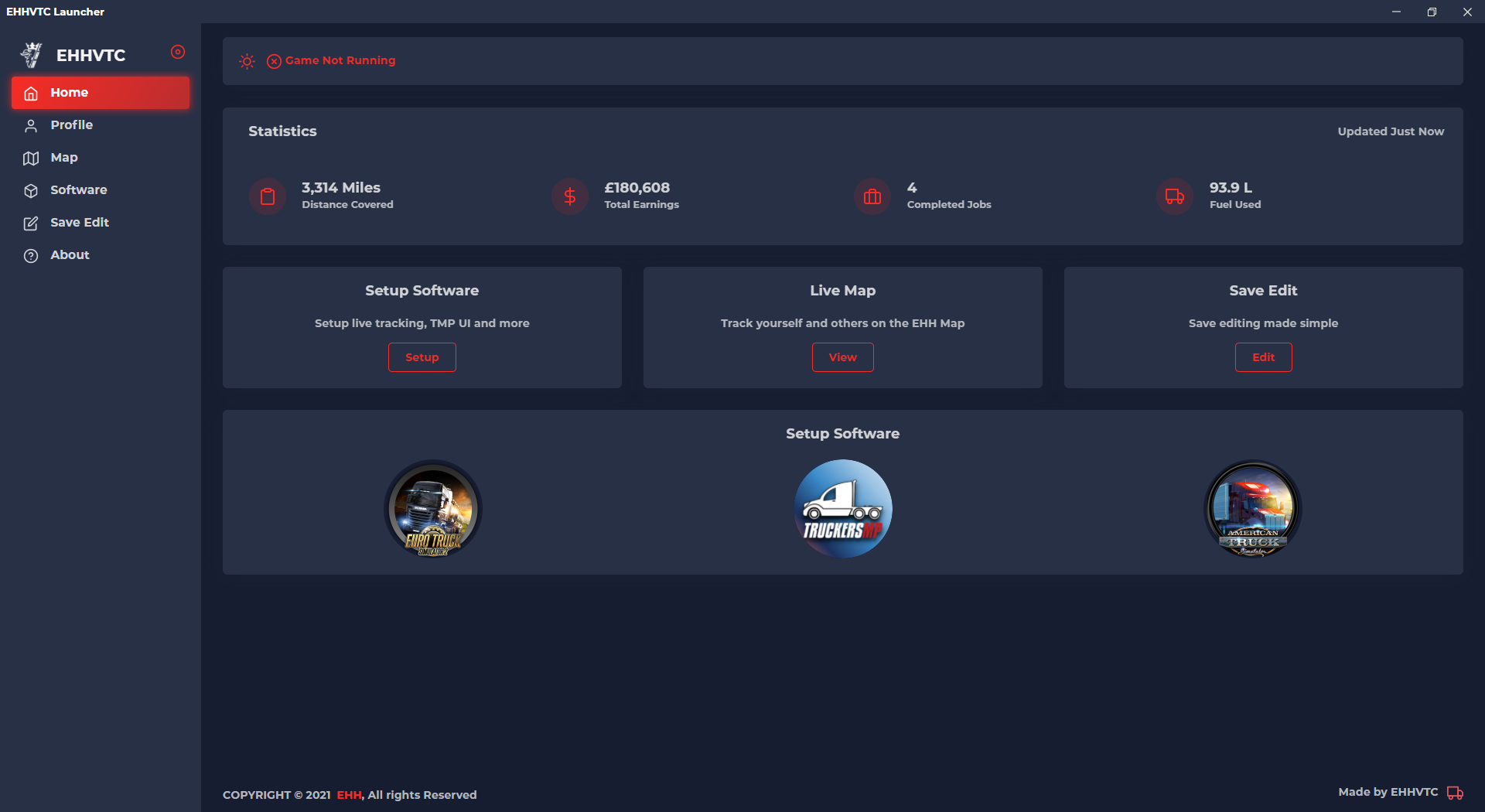 Please apply through our website, before applying here! https://ehhvtc.com/apply